Cover for "The Paris Kiss" by Jasmina Mihajlovic 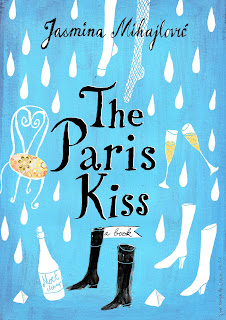 The book by Jasmina Mihajlovic The Paris Kiss just showed up in Kindle edition on amazon.com with my cover design
Here's the link:::
http://www.amazon.com/The-Paris-kiss-ebook/dp/B005UCWA9C/ref=sr_1_2?s=digital-text&ie=UTF8&qid=1318265011&sr=1-2

and the second comp 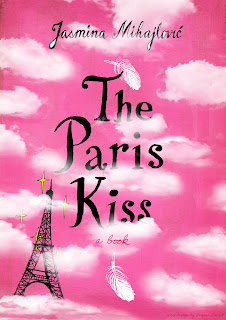 and a little blurb about the book:

The Paris Kiss is a specific adventure-travelogue novel. It takes place during four days in Paris. It the same time it’s an amusing metaphysical-philosophical-esoteric novel that can be read as a survival guide for the newest era that we’ve stepped into. It’s a book on how to overcome stress, how to buy a pair of boots in Paris, what the future will be like, what will happen to Christianity and other religions, which cafes in Paris are good, how Belgrade is seen from Paris and how Paris from Belgrade.

Beside the fact that the events take place within a four day span, the Paris Kiss tells of the moment all of us, all of mankind, are in. The junction of the new era and the newest era. Or the crossroads where the analogue era turns into the digital. That’s why it also tells a tale of love, solitude, fear, global climatic changes, nature as the greatest luxury, Paris as a city concealing the entrance to the netherworld, male-female relations and the new era of the female divine. The Paris Kiss seeks and finds the new Messiah the third millennium is longing for.

This detective-alchemist novel with elements of science fiction and the deciphering of urban city codes attempts, through the past, to perceive the future. Among other things, it tells of Mona Lisa’s code, mega-stores, large fashion brands, immortality, and whether speed hastens life or cancels it out. In any case, this is a triple-layer novel of significant volume that much has fit into, including the excitement of the readers to see the end of the initiation search disguised as the purchase of three pairs of boots.

The Paris Kiss is and ultra-light novel with bulky subjects.
Posted by Dragana Nikolić