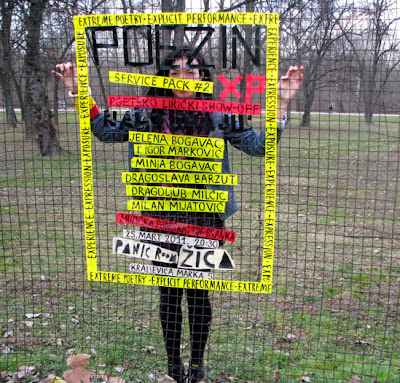 Thanks to André Felipe from Typo/Graphic Posters for making an interview with me about Poezin posters.
More here: www.typographicposters.com/blog/poezin-posters-dragana-nikolic

and here is the whole text of the interview:::::


an underground event and its posters, by the graphic designer dragana nikolic from serbia. she is responsible for three series of posters. the work is very creative, expressive and done with a lot of freedom, body painting, wire fences, chinese kung fu symbols, and, of course, typography.

poezin is an event that includes performance, slam, hip-hop, street poetry, poetry, and is based on underground culture. it is aiming to create a new poetry scene in belgrade, where the audience is the only and most valuable critic, and everyone can apply.

typo/graphic posters: what was the first impression from your client when you presented the design?

dragana nikolic:
it wasn’t a classical client-designer story. it started as a non-commercial project with no money, i was helping some friends that were organizing this poetry event. they trusted in me, and i had the freedom to do whatever i want. in the end they were very satisfied.

how was the outcome of the posters and feedback from the public?

i guess that the public didn’t expect this. they were generally excited and sending feedback mostly about the body-art series, writing/painting on bodies of poets that were performing. just a few posters were printed and placed on the venue, mainly they were spread through the internet, facebook and emails.

please tell us about your experience making the posters. which challenges did you find?

the biggest challenges were perhaps changing of the venues to keep the design following the concept of the events, since in these few years there were maybe 6 differents clubs, that are all a story for itself. here are some connections:
- the outdoor wire series: it was made for the club called žica (the wire), so it was a logical solution;
- kung fu series: the event was held in the club called u zmajevom gnezdu (in the dragon’s nest, name clearly inspired by bruce lee’s films) in the bigz building, used to be the headquarters of the national printing institution of yugoslavia, a symbol of the ex-country, and now an almost ruined place, kind of a new art center, but with an incredible spirit. so, i also wanted to connect those two things, beautiful and spooky old hallways, the atmosphere and chinese symbols.

in most of your posters there is a battle between readability and expression - what is your opinion about communication through posters?

yes, i prefer aesthetics over functionality and think that poster is more than just giving information. it goes beyond applicability – like this interview proves, since you don’t understand serbian, and yet you’ve invited me to talk about my work. expression brokes the language barriers. of course when i have strict demands, i am pretty disciplined.

tell us about your visual and cultural references.

i live in belgrade (serbia), which is a very beautiful and inspiring city for me. i really admire artists like stefan sagmeister, tadanori yokoo, coralie bickford-smith, gray318, igor hofbauer… and many more, it is really hard to say! also i try to show admiration and respect for some of them secretly or openly in my work, so it is for the viewers to find.

i would like to thank my friends from poezin, milan and sinister, who started the whole thing, for such enthusiasm, help and inspiration, and also the poets, performers, etc. it is one lively and creative bunch of people. without that kind of creative interaction nothing of this would’ve happened.

dragana has graduated at the academy of arts in novi sad, and exhibited in serbia, london, croatia, slovenia and received important awards like the “golden bra award” for best book design at the magdalena festival, slovenia (2013), with a series of poetry books for treći trg.

we are proud to have dragana’s as a member of typo/graphic posters, where you can enjoy more of her work: www.typographicposters.com/dragana-nikolic